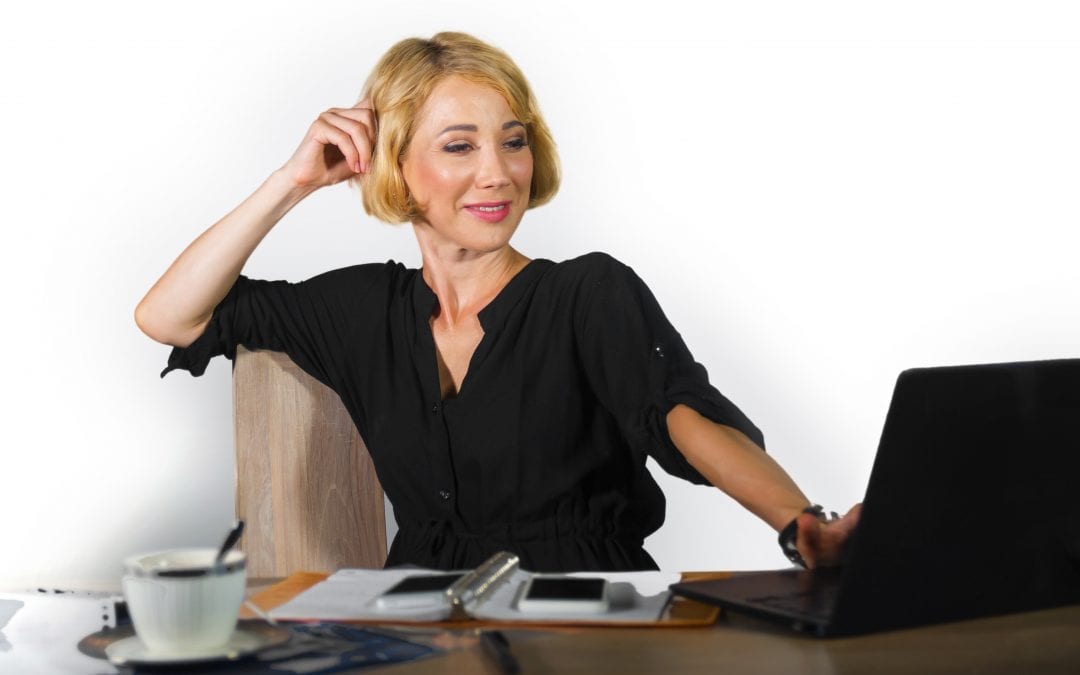 I was recently approached by a female executive who, like many others I have worked with, had a very specific coaching request. She’d been told her voice was too high and that she should lower it to sound more authoritative. As always, I talked her out of the idea and suggested some other ways to enhance her personal impact (more on that later) but the fact she’d been given the advice in the first place had me grinding my teeth in frustration. Because it’s terrible advice – lazy, generic and misleading. And it’s not standalone. Women are regularly given questionable feedback on their voices, body language and linguistic habits. And too often the recommendations seem to be based on outdated ideas of making it in a man’s world. Here are three of the most common executive presence “myths” that I believe women should stop listening to:

Women make themselves small, we all know that. With our crossed legs and our tucked elbows, it’s a wonder we ever get seen. The answer, a certain type of expert likes to tell us, is to take up more space. One article I read suggests: “In a meeting put your elbows on the arms of your chair or hook one arm over the back. Spread your belongings out on the table and use bigger gestures”. This is not only impractical (imagine if every woman in a meeting tried this at the same time) it’s also absurd. It seems to imply that employing the female equivalent of manspreading (ladysplaying?) will give you an instant presence boost. Seriously? Exactly how much space would a slender woman of 5’4” have to take up to match the physical presence of, say, a man of 6’2” who once played rugby?

The reality is more nuanced than this. In her book “Presence” the National Theatre voice coach Patsy Rodenburg describes three circles of presence. In the first circle, people focus their energy inward, which is often due to a lack of confidence. Third circle people send their energy outward in order to dominate. Second circle people, on the other hand, inhabit their space. They have the right balance of self-awareness and presence for others. This is crucial. By spreading out you run the risk of encroaching on others’ space in order to increase your own. If you’ve ever had a tussle with a fellow passenger over the armrest on a flight, you’ll know this is a zero-sum game. People with real presence don’t need to stake their claim so forcefully. Their inner confidence manifests outwardly in being comfortable in their own skin and inhabiting their space.

You know the drill: women have awful high-pitched, squeaky voices. We’re far too excitable and, when we assert ourselves, prone to sounding shrill. As the classicist Mary Beard points out in her book “Women and Power”, this idea goes back to the ancient Greeks who believed that women’s voices weren’t fit for public discourse and shouldn’t be heard outside of a domestic environment. As recently as the mid nineties, you would have found a similar claim in The Penguin Book of Historic Speeches – women’s voices are just not made for great oratory. The antidote? Drop your pitch.

In the UK, we have Margaret Thatcher to thank for validating the myth that speaking at a lower pitch will give a woman authority and make her easier to listen to. And while there are studies that show that we associate deeper voices with authority, lowering your pitch won’t necessarily make your voice “deep” and can even be damaging (everyone’s voice has an optimum pitch and, unless you work at it with a coach, speaking below optimum pitch for prolonged periods can cause vocal fatigue). And is it worth losing some of your range and expressivity, as Thatcher did, for the sake of sounding, let’s face it, more like a man?

Far better to work on a stronger sense of intention and drive behind what you are saying, so that you sound more certain of yourself. And if it’s depth that concerns you, learning to maximise your resonance and project your voice from the abdominal muscles will give you a stronger and deeper sound. In this way you have power and range, giving you the kind of voice people really want to listen to. Ultimately, it’s as much about attitude as it is about sound.

I doubt anyone would disagree that our body language has a significant impact on how we are perceived. Sustained eye contact, a firm handshake and an upright posture can all telegraph confidence and will work equally well for women as men. But when it comes to gestures, things get a little more complicated. We’ve all seen videos of male politicians backslapping and hand mangling in an effort to one-up each other in the power stakes but female politicians don’t tend to get involved in this kind of display, it’s just not what we do. Women in business constantly walk the line between being accused of being too much or too little; suggesting they should fist pump or hand chop to underline a point could result in them being perceived as aggressive.

We tend to use more powerful gestures when we have a particularly strong point of view but not every meeting is a show of strength. And consciously “doing” a powerful gesture usually looks contrived (just look at Donald Trump’s finger-steepling) which is why I would never suggest it. Gestures are an integral part of communication but the size, type and frequency of gesture is specific to each individual. Becoming comfortable with using your hands when speaking in front of others is definitely to be encouraged, but being prescriptive about which gestures to use is less helpful. A huge part of presence is about situational awareness.

For more information on body language and gesture, check out our blog Executive Presence: The Myth And The Reality.

So, What Should Women Do?

Presence is not generated through a prescribed set of gestures and behaviours. It’s the outward manifestation of an inner state; a self-assuredness that comes from knowing who you are, what you stand for and how you can make a difference. If women want to develop presence, we need to start by working from the inside out rather than the outside in: appreciating our unique strengths, diminishing the negative thought patterns that undermine our self-confidence and developing our personal brand. Because taking our space and speaking more assertively is far more likely to happen when we feel confident and empowered. And women will never feel that way if we are constantly told the route to success is to look, sound and behave like a man.

If you want to work on your presence, communication skills or public speaking style, contact us at: info@bespoke-coaching.com or sign up to get our monthly blog straight to your inbox.